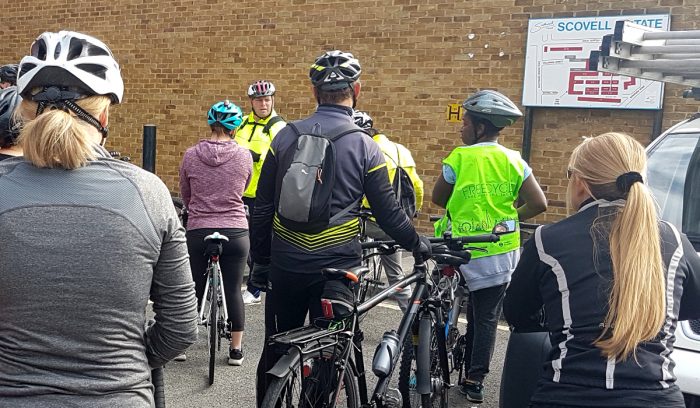 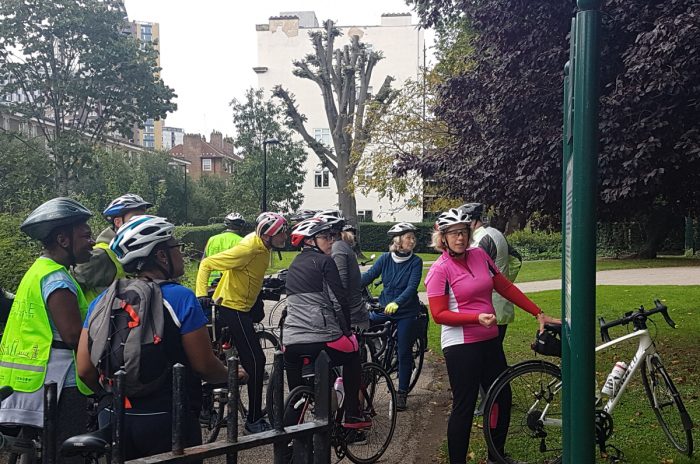 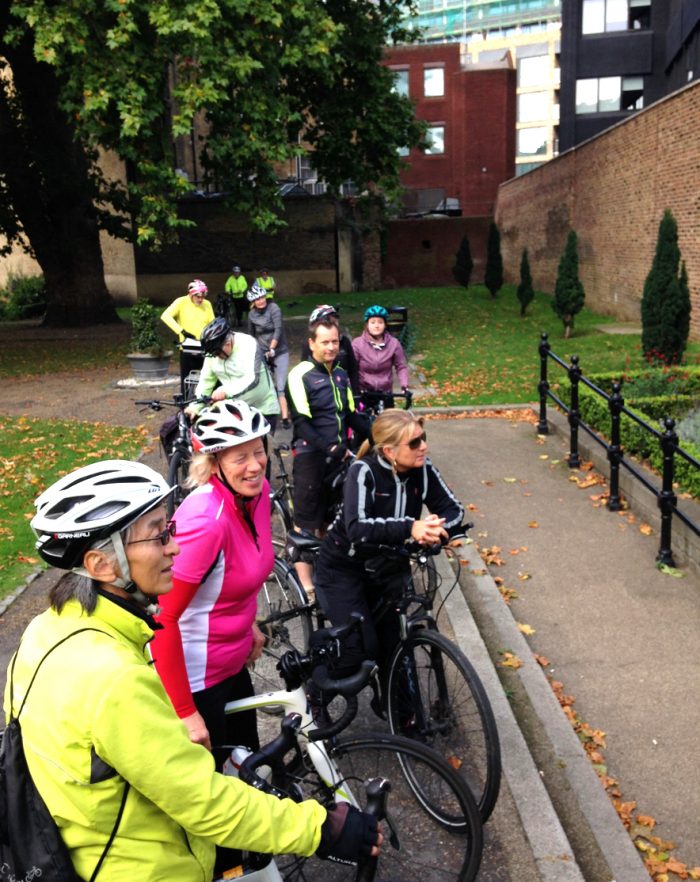 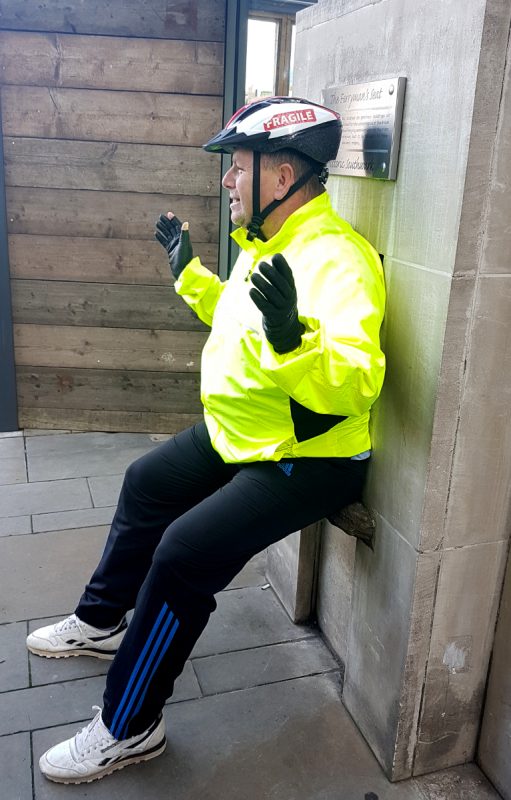 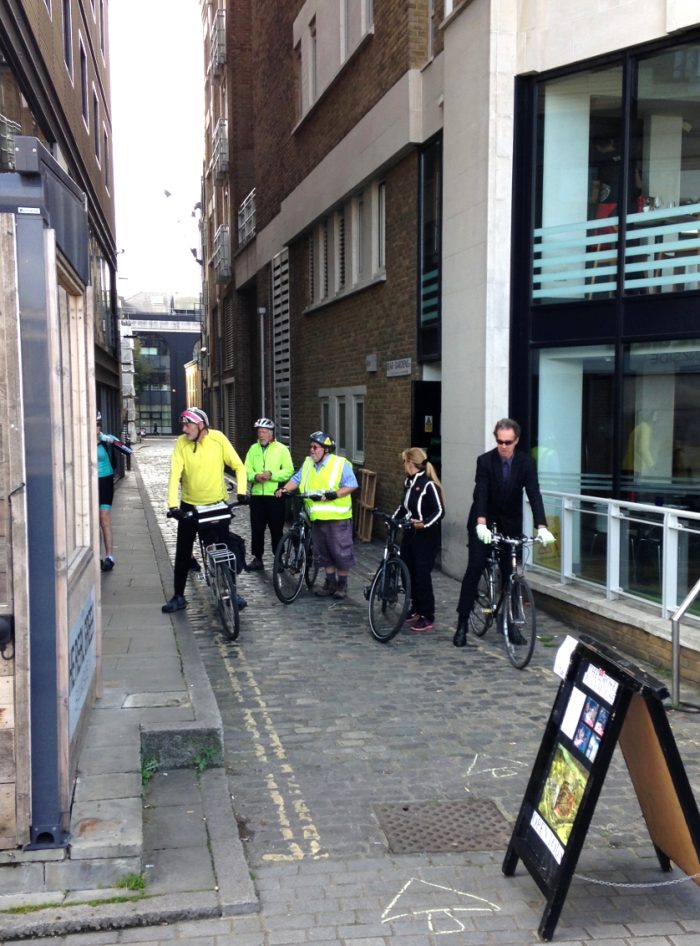 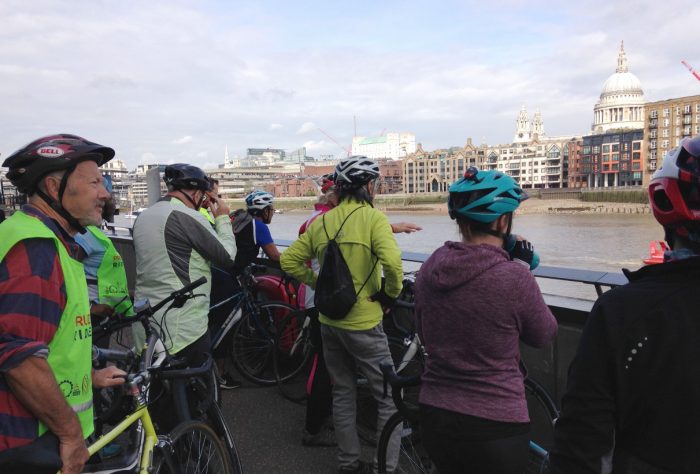 21 riders gathered in Peckham Square for an intriguingly titled ride organized and led by Harry.  Headed north via Burgess Park and the Walworth Green Way to Newington Gardens, off Harper Rd.  An informative board showed a picture of the Horsemonger Lane Gaol, this having been the 19th Century occupant of the land that now formed the park.  The picture was remarkable as it showed a row of hanged people on the roof of the gaol.  From Harper Rd it was a short hop to the Borough where we entered St George’s churchyard garden and viewed the remains of the perimeter wall of the Marshalsea prison.  This was where Charles Dickens father was incarcerated.  It was made famous in Dickens’ novel Little Dorrit.  Next we headed north and west via Newcomen St where works are progressing on Quietway 14.  Reached the river at Bankside where the old (no-one knows how old) Ferryman’s Seat is located in Bear Gardens (a narrow street) close to the river.  Harry tried the seat for size, it was a tight squeeze, a few more Healthy Rides are perhaps needed! The return route took us across Southwark Bridge Rd and into Scovell Rd.  Here we stopped by the Scovell Estate because this is built on the site of the Kings Bench Prison, a thriving enterprise in the 14th to 18th centuries.  There are no information boards here, so Harry told us a little of the history.  From Scovell Rd we headed back to Peckham via Quietway 1 and the Canal path.

An interesting and educational ride.  Much more detail is in the attached document.  The route was flat and pretty quiet and we were well-organised at the many crossings (special thanks to our back-marker David for that).  Back in Peckham Square by 11.45.  The 9 mile route can be found at www.mapmyride.com/routes/view/1760844296.  More photos at http://healthyrider.weebly.com/healthy-ride-reports-august_sept-2017.html

With the route track and Harry’s information sheet why not try this ride yourself?