New Southwark Spine proposals – are they up to much? (spoiler: they are not)

A simple test for good cycling infrastructure: if you can’t take your less confident non-cycling loved one on it then it isn’t up to par. If conditions mean it is uncomfortable to hold a leisurely chat, then that’s also a bad sign. Protected lanes are good, right? Well, not if they expose cyclists to vehicles turning across them.

Do the Spine proposals pass any of these tests?

(See the consultation for yourself, here) 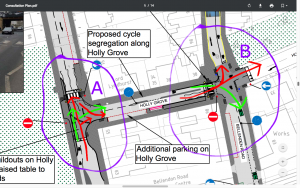 (Bellenden Gyratoy conflicts: cyclists – represented in green – are pinned to the left and must suddenly merge [A] with general traffic – represented in red – and are vulnerable to turning traffic in both areas [A] and [B] for the same reason)

Two years ago a majority of respondents supported the removal of the Bellenden one-way system, but councillors were too spineless to do it. These proposals represent an unambitious response, for what is supposed to be part of Southwark’s flagship cycling route. 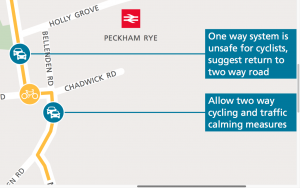 Removal of the one-way system in Bellenden is key for road safety and should be comfortable for cyclists and pedestrians alike, the protected lanes being put in make cyclists more vulnerable to turning traffic.

We will continue to call for the removal of this one-way system.

For most of this route you will be confronted by painted markings to show you the way through narrow rat runs, with little else to improve conditions. The protective qualities of paint have been tried and found wanting over and over again. No one is going to trust their child to the protection of a cycling logo on the road. 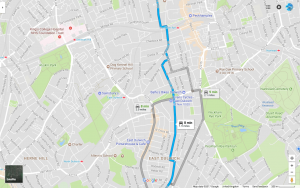 (a route on a rat run, car satnavs see The Spine as a key desire line, with nothing to prevent a free flow) 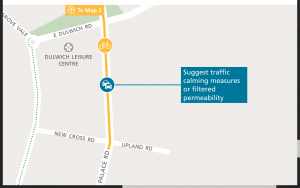 (previously Southwark had suggested that through traffic could be reduced – filtered – as part of its plans.)

Here is a quick breakdown (and critique) of what is presented in this iteration of The Spine (for a full breakdown, please see our full consultation response – coming soon): 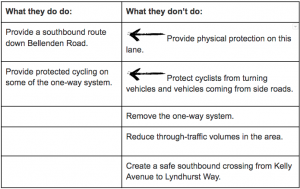