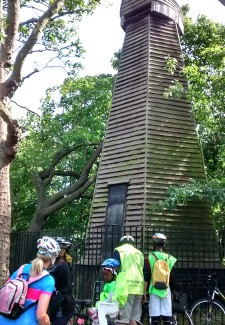 A “+” ride, so 9.30 start. 12 riders at Burgess Park surrounded by the stands preparing for the Elephant and Nun Festival. Dry morning with the promise of sunshine later. Ride title was Commons, Parks and Windmills and the first stop was at Brixton Mill, reached via Myatts Fields. Then on to Clapham Common – Windmill Drive but alas no windmill – only the road name and the pub to remind us. From Clapham common a short run to Wandsworth Common and a coffee stop at the excellent Skylark Café. By now the sunshine had arrived and riders were shedding layers. A short run south from the Café took us to Wandsworth Mill. Only the tower remains and this is surrounded by trees. But recognisably a windmill.

From Wandsworth Common took a fairly direct route to the north edge of Tooting Bec Common. Did not attempt the route through Tooting Commons due to worry about time. Finally rode back via Brockwell and Ruskin Parks. Arrived at Burgess Park Café at 12.50 having covered about 16 miles.

Massive well done @StopKillingCycl &
@XRLondon for amazing work in K&C. Important to remember that though the focus is on cycling this is not a safe road for people on foot with large numbers injured in past 5 yrs. These lanes were a vital first step to making #KHS safer for all

Local campaigns are growing & the process for a judicial review of the decision has begun.
Follow: @betterstreetskc 👈🏿

** HEY, HAVE YOU VOTED YET **
London's north-south cycleway #CS6 #C6 is in #Group2, in the #CyclingInfraWorldCup.
Voting closes at 7pm.

The WORLD CUP OF GREAT UK CYCLING INFRASTRUCTURE has started. Can Cycleway 6 make it to the next round? Vote here 👇