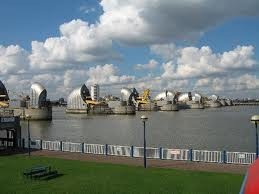 17 riders set out at 9.30 from Canada Water for another “+” ride with Bruce leading and David assisting. Headed for the river at South Dock, then NR4 following the Thames to Greenwich. Collected a further rider at the Cutty Sark and continued along the river all the way to the Thames Barrier. Amazed to see one of the Thames Clipper boats beached on the sandy mud (it was low tide) by the O2. Thought this might be a navigational error, but subsequently found that Thames Clippers deliberately do this to allow the removal of debris from the impellers in the jet system. After a longish coffee stop at the Barrier, returned by the same route pretty much. Back at Canada Water bang on 1pm having covered about 17 miles. Next ride Aug 23rd, 10am, Peckham Square.