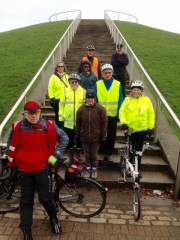 Report from Werner who led the ride.
Rain overnight and enough wind to bring down one small tree/bush in Russia Dock Woodland between yesterday’s route check and today’s ride. Dry at the start and even a glimpse of sunshine. A hint of drizzle in the last quarter but not serious. The cold wind was still present and there were one or two envious looks at my neoprene overshoes accompanied by questions whether my feet were warm. An unexpected total of 10 riders including a first-time (AFAIK) delegation from LCC HQ, Charlie with a friend and Rose joined us. David reliably tail-ending as usual.
Had gone down to Deptford yesterday, no sign of a functional bridge, so plan A, i.e. peninsular meandering. Decided it might be fun to stay within the wards of Rotherhithe and Surrey Docks (I think we briefly strayed into SE1 so I it wasn’t SE16 only).
An explanatory stop chez Salters (the new replacement statues of Dr Salter, wife and daughter) was necessary, as a few hadn’t heard of them. Also lots of ignorance about Stave Hill so first-time ascensions while I guarded the bikes and professionally taken photo afterwards.
About 1m into Deptford to go around the Boundary Stone and then a brief stop at Barry’s bike. It was nice to see that somebody had put a bit of tinsel through the front-wheel, I think Barry would have approved it. Some of our riders weren’t aware who Barry was so David, Charlie and I provided a bit of history.
Back with a few minutes to spare. A very quiet morning, hardly anybody around and even Surrey Quays had fewer shoppers than most Saturdays. Route at http://taffimai.w2.org.uk/healthy-rides/HR-Rotherhithe-20141227.html