Camberwell Grove closure: but what about…? 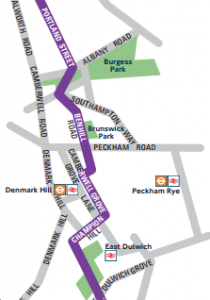 We want Camberwell Grove bridge kept as a cycling / walking bridge only:

Since some people have concerns about keeping motor traffic off the bridge, we hope this post will help.

Heavy goods vehicles have been physically prevented from crossing the bridge for a decade – the damage is caused by the constant flow of cars and vans the 150 year old bridge was simply not designed to carry.

The Council does not have any legal duty to reopen the road to motor vehicles. It has broad powers to manage traffic flows to improve safety and air quality. Contrary to misleading suggestions, there was ‘no order to repair and reopen the bridge’, which is the responsibility of Network Rail anyway.

Removing the weight restriction and one-way working would cost at least £1m, and possibly much more given the age of the bridge. The works would be very disruptive to the railway as well as the road.

With other bridges nearby and budget cuts continuing, it is widely accepted to be uneconomic to spend so much. In particular, with the Mayor of London requiring boroughs to draw up plans to reduce car travel by 3m trips per day, targetting short trips in particular. it would be difficult for the council to raise the money  from Transport for London.

The diversion for cars is minimal, even for short trips. For those wanting to drive the 2 miles between East Dulwich and Camberwell, for example, alternative routes are just 10% further.

By contrast, there is no north-south cycling route within a mile of Camberwell Grove suitable for all ages and abilities!

No one wants more motor traffic on their street.  Much of the extra traffic that residents have been noticing is due to increased traffic across inner London (from the rise of Uber, internet shopping deliveries etc.) rather than the closure itself. Across the wider area background traffic has increased by 15% in two years. By contrast, the traffic impacts from the bridge have reduced since November 2016, as drivers become ever more used to the changes.

While Chadwick Road has seen the biggest increase, it is still one of the quietest residential streets in the area.  Even with the closure reducing traffic on  Grove Hill Road outside the Dog Kennel Hill primary school by a third, traffic levels remain 2.5 times higher than on Chadwick Road.

There is very little difference in width between Camberwell Grove and other neighbouring streets. While two cars can pass in either direction, it’s difficult for large vehicles to pass each other, unlike on main roads like Grove Hill and Rye Lane.

Furthermore, other roads will be getting their own improvements. Southwark have now announced plans to improve safety on the Bellenden Road and Lyndhurst Way one-way system. Although we’re not exactly sure what: http://moderngov.southwark.gov.uk/mgIssueHistoryHome.aspx?IId=50015014&PlanId=483

Closing the bridge will allow safety imporvements to be made on Grove Hill Road, Dog Kennel Hill junction and Champion Hill. The reports underpinnning the Cabinet Member’s previous decision ‘Cycling Quietway 7 – Elephant and Castle to Crystal Palace, 11/11/2016’ make it clear that Quietway-linked improvements to Champion Hill and the Grove Hill Road-Dog Kennel Hill junction are dependent upon a reduction in motor traffic volumes on these roads, and that this will require linked reductions in the motor traffic going to and from them via Camberwell Grove. As such, the bridge decision will directly affect adjacent sections of Quietway 7 and South Camberwell, not only Camberwell Grove and the diversion route.

A permanent bridge closure will allow the junctions with Grove Park and McNeil Road to be re-designed to take account of the new traffic flows. This did not happened earlier because the bridge was closed as an unplanned emergency measure because it was in danger of collapse.

If you would like any assistance from Southwark Cyclists to campaign for safety improvements to either Grove Park or McNeil Road, or any other route in the area, then we are happy to help. Whether or not the bridge re-opens, we will continue to campaign for cycle safety in Southwark, particularly on Quietway routes.

Re-opening the bridge means traffic for everyone. Reopening the bridge will mean that high levels of traffic return to Camberwell Grove – but it will have a minimal impact on Lyndhurst, Bellenden, etc. Any respite is likely to be short-lived as satnavs direct ever more drivers off main roads and onto our residential streets.

Re-opening the bridge would have no impact on lorries or even most vans, because they will still not be able to use it. That’s because it’s proposed that the weight and width restrictions would need to be significantly reduced from before: the weight restriction would go down from 7.5t to 3t, at a time when vehicles are becoming heavier and delivery vans increase in number.

The bridge would have to be made narrower from 7’2 to 6’6, reducing speeds and increasing queues and air pollution. With some common cars having just 2cm clearance, more drivers would get stuck, particularly those turning left out of McNeil Road, leading to road rage.

And with evidence that the community is against any traffic management at all, the council will likely start tackling the traffic problem in areas where they’ve seen support instead.

Emissions are highest on roads on inclines like Camberwell Grove, due to the impact on engines and brakes. The combination of a primary school, key cycle route and proximity to Denmark Hill station means lots of people walking and cycling are at risk of exposure if the bridge is reopened. The longer queues over the bridge from the proposed narrowings would make it worse.

While electric vehicles have no exhausts, they still cause a lot of the most deadly form of pollution called particulates from their brakes. That’s why the Mayor of London has set targets to reduce motor traffic and increase cycling and walking. Key to this is creating more healthy streets where people feel safe walking and cycling. Keeping the bridge closed to motor vehicles is one of the best single ways to do this in Camberwell.

There’s no evidence that Camberwell Grove’s closure has affected response times. Fire engines have not been able to use the bridge for a decade, while the location of King’s College ambulance station on a parallel road mean there’s no need for ambulances to cross the bridge.

Regarding cycleways in general, the London Ambulance Service has said ‘It is impossible to directly link the construction of the Cycle superhighways to an increase in our response times due to the number of variables at play’. http://committees.westminster.gov.uk/documents/s23959/London%20Ambulance%20Service.pdf

Encouraging people to cycle rather than drive will help make emergency response times shorter: cycling reduces congestion, and a dozen cycles are able to pull out of the way of an emergency vehicle far more easily than a dozen cars, for example.

Again there’s no evidence at all of this. By contrast evidence suggests that shopkeepers overestimate the proportion of customers who drive (Sustrans, 2006). People who walk and cycle spend more on average in local shops than drivers (DfT, 2013). Given how many more cycle parking than car parking spaces there are in Camberwell, encouraging cycling is better for local shops and services.

It’s misleading to suggest this is a battle between a few rich people on Camberwell Grove and the rest of us.

Southwark has some of the worst death rates from air pollution and obesity due to physical inactivity in the UK (Defra, 2016 & NHS, 2014). It also has one of the lowest rates of car ownership (Census 2011).  Many people in the local area want the bridge to remain closed to rat-running, as the first part in the jigsaw of bold action to improve the quality of our air and increase the attractiveness of walking and cycling.

Closing the bridge makes it easier to make the areas roads safer. There have been complaints about the junction between McNeil Road and Camberwell Grove: the temporary road layout and materials are poorly designed, with limited visibility between road users and the pedestrian signals switched off.  A permanent closure would facilitate pedestrian priority here, such as a raised zebra crossing. 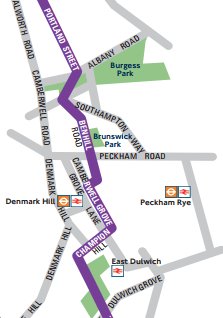 The only solution to make Camberwell Grove safe for all ages to cycle on is to keep the closure in place. It is shortly to be designated as cycle Quietway 7, and it is a vital part of Southwark’s cycle network, a network that needs to be improved for more people and freight to be able to get around emissions free.
The busiest section of Bellenden Road, which is also a proposed cycle route, has only seen a 6% increase in motor traffic. Yes, the traffic needs to be tackled before the Belham Primary School opens, but this will not happen if residents of different streets simply seek to push traffic on onto the roads of others. The only long-term answer is for the local community to call for traffic reduction across the area. There is already a council commitment backed up by funding to deliver the Southwark Spine cycle route right past the school.

The council will not support big plans if people keep opposing the first steps. If people want safer, healthier streets in Camberwell and Peckham with less motor traffic, they have to clearly say so in this consultation.

Southwark has been falling far behind boroughs like Hackney and Camden. These progressive boroughs are closing lots of their streets to rat-running to make them safer and less polluted. Southwark Council needs to do the same – and we residents need to tell them that it’s what we want. It’s time for us now to take a step in the right direction too!