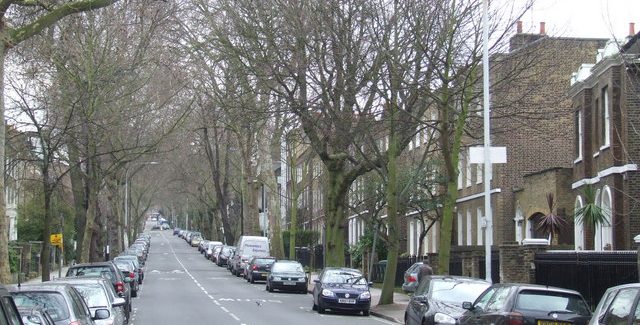 Part 2 of the Quietway 7 update is rather longer, and about the current situation on Camberwell Grove and Champion Hill.

There has been no proposal and no consultation on the Camberwell Grove section of Quietway 7. In previous years, the railway bridge at Camberwell Grove has had to be closed temporarily due to structural issues, but has never been permanently totally closed to motor traffic. When the bridge is open, there is too much motor traffic on Camberwell Grove for it to be a Quietway, which needs to be safe and pleasant for children, new cyclists and everyone else.

There was a proposal to limit access to Champion Hill from Dog Kennel Grove to pedestrians and cyclists. This received majority support from local residents in consultation. Southwark Cyclists strongly supports this proposal, as the current road is dangerously busy with motor vehicles using Champion Hill as a through-route. Unfortunately, TfL forbade the reinstatement of the right turn from Grove Hill Road, because their modelling indicated unacceptable delays to buses.

The council has finished monitoring traffic across this area, in combination with the Bellenden area, and officers are currently analysing the results.  Their report should be available at the Camberwell Community Council meeting in summer, though Southwark Cyclists will continue asking for informal updates.

I believe the idea is to create an area-wide traffic management plan, creating routes for drivers which do not send large numbers of motor vehicles down residential streets.

The closure was originally slated to be 2 years, but it now looks like the work will be completed by the end of 2017.

The importance of low-traffic routes for cycling

According to London Cycling Campaign policy, cyclists need protected space separate from motor vehicles where speeds are over 20mph, or there are over 2000 cars per day. Effectively, if there is enough traffic that you are guaranteed to meet an oncoming car, or be overtaken, then the road is not quiet enough for everyone to be happy about cycling on it. Likewise, even if there is very little traffic, it is scary if it comes whizzing past you at 25mph or faster.

Champion Hill likewise saw 4000 vehicles per day – back in 2008. Again, the steady stream of vehicles down this road which makes it very unpleasant to use; especially combined with a blind corner, and lots of pinch points and parking on the north-south stretch.

Do you want to let your kids cycle along there? Are you happy to wobble home from the supermarket with your bike fully laden with bags, or from the garden centre with a shrub strapped to the back? There’s nothing inherently dangerous about carrying shopping or kids or yourself on a bicycle – the Dutch do it day in and day out. But close overtaking from even a small percentage of impatient drivers becomes a routine occurrence when there are enough people driving on a road. If we want cycling to be an option for everyone, from 8 to 80+ and all of us in between, then there need to be traffic-free routes.

What we want to see on Quietway 7

We would like Southwark Council to make decisions according to the priorities which they have promised their constituents: healthy streets for residents, which are quiet and not polluted; safe environments for children to travel actively to school, on foot and by bike; better air quality for everyone; and connected routes which will enable everyone to cycle.

We would like to see motor-traffic volumes on Champion Hill and Camberwell Grove reduced to the levels required by the London Cycling Campaign. We think the best way to do that is almost certainly to keep Camberwell Grove railway bridge shut to motor traffic, and to do the same for Champion Hill, as originally proposed. If this results in drivers using other residential streets instead, then similar solutions should be found on those streets. Residents of Camberwell Grove and Champion Hill were not consulted on whether they wanted their street to be used as a main road; it seems grossly unfair to allow it to happen by default.

We will continue to be in contact with the council about this project, and to press them to make Quietway 7 a continuous route, so that residents of Dulwich can cycle to Burgess Park, residents of Peckham can cycle to Crystal Palace, and residents of South Camberwell can cycle from their own front doors!

If you would like to get involved, contact us, or contact the Camberwell Grove Traffic Campaign to see how you can help, or how we can help you.