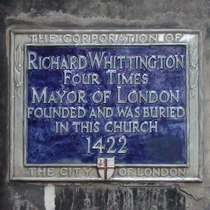 On a sunny and warm (where the wind didn’t get you) Boxing Day thirteen riders turned up at Canada Water for the post-turkey Healthy Ride. Tower Bridge had been opened earlier than planned and irresistible offers in the sales were expected to draw people to Oxford Street. That made it a good day to close a gap in the healthy ride programme, the Rotherhithe tunnel. As nobody vetoed the proposal we went underground. We weren’t disappointed, the air was breathable and protection from the wind made it an almost calm experience. Not only is a peloton of thirteen unusual in the tunnel, other numbers also deviated significantly from the average: only one wing mirror to negotiate on the pavement but two pedestrians.
On the far side we picked up CS3 and followed it to Tower Hill with a brief stop to look at the Cable Street mural. We left the bike lane to turn into Minories and Crosswall. Of course, being in that area it’s impossible not to ride through French Ordinary Court, esp. when there’s a chance to surprise a few riders who didn’t know it existed. As it was still Christmas we drifted through a quiet City past a few places linked to Dickens’s Christmas Carols: Leadenhall Market, from which Scrooge probably ordered the turkey (Old Tom’s Bar is named after the Belgian immigrant gander who escaped the oven and achieved the age of 37 and an obituary in the Times), and lanes and courts near Cornhill where Bob Cratchit froze in Scrooge’s office.
As it’s panto season we joined CS3 via College Hill to look at Richard Whittington’s plaque outside St Michael Paternoster: Four times Mayor of London but no mention of his cat. The Rennie St detour after Blackfriars Bridge to avoid the left turn off the bridge fully exposed us to the strong crosswind funnelled along Blackfriars Road.
Demand for coffee got louder during the ride and we stopped outside Hay’s Galleria. Most of the riders took that opportunity to head home (or to the sales) and the ride finished there.
Many thanks to Werner for organizing and leading this seasonal Healthy Ride ( and for the informative ride report).

Latest ideas for the Brunel Bridge (or Mayflower Bridge?)