Construction and road worksCycle and road safetyCycle facilities
No Comments 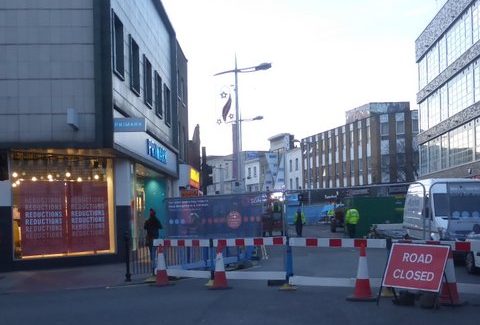 Apart from that Rye Lane is just the same. All the rat-running entrances and exits are open, the delivery vans are parking on the double yellow lines and private cars are speeding. The congestion and the speeding seem to be keeping the pedestrians on the pavements for now. All buses are diverted via Copeland Road except the P13 which is using Lyndhurst Way. Cyclists are getting through as we do.

The works will be a rolling programme up Rye Lane starting at the north end which is currently shut at the junction with Hanover Park (by Primark for the shallow amongst us). So no motors end to end.

Longer term the council is studying how this works out and may base future plans for Rye Lane on what happens. There’s not a great deal of change to study at the moment, though as the works travel southwards they will block the rat-running entrances and exits. Most cars coming in from Bournemouth Road go on to turn up Choumert por ejemplo. Switching them off would be nice.