Example of an existing pavement build out in Linden Grove is shown above.

Recent cycle schemes from Southwark are full of pavement build outs. For cyclists, build outs can be dangerous as they force cyclists into the general traffic flow. This is widely recognised:

London Cycling Design Standard, 2005. Section 3.6.6:  “Footway build-outs should not restrict cycle flows or require cyclists to swerve into the path of other vehicles”

The new LCDS 2015 says: 3.5.7: “It is essential from both a road safety and movement perspective that build-outs do not cause pinch-points, forcing cyclists to deviate into the path of vehicles, or restricting cycle flows.”

Cycling England’s Design Portfolio.  A.03 Traffic Calming, Road Narrowings: “Central refuges, build-outs and other forms of road narrowing are often used as traffic calming measures by reducing the available width. However, this can often lead to problems if the resulting gap is not wide enough for cyclists to be overtaken safely.”

“Where sufficient space exists, a properly designed cycle by-pass will allow cyclists to safely and conveniently avoid the build out. If limited space precludes the construction of an arrangement that can be mechanically swept, a ramped by-pass can be considered.” http://www.ciltuk.org.uk/Portals/0/Documents/The%20Hub/Design%20Toolkit/A03_Design_portfolio_traffic_calming.pdf

So the solution, if build outs are needed, is to provide cycle bypasses.

This is well discussed in a 1997 Traffic Advisory Leaflet. 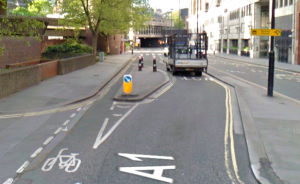 Illustrated is an example from the City (Aldersgate St). In fact this is not a particularly good example as the traffic exiting the chicane has to turn sharply and often ends up close to the kerb, endangering cyclists exiting the bypass. This is easily avoided by tapering the return route for motors more gradually.

Buildouts are also used to narrow roads so that pedestrians can cross more easily. These buildouts are sometimes too small to allow a bypass. My opinion is that if a crossing is needed, then a proper Zebra or other formal pedestrian crossing should be installed. The road width should not be reduced.

Note, this post aims to get views about buildouts.  Opinions expressed are those of the author (Bruce Lynn); they do not represent Southwark Cyclists policy.  We would like to know what cyclists in general feel about buildouts.  The best place to comment is the Southwark Cyclists Yahoo Group (https://groups.yahoo.com/neo/groups/SOUTHWARKCYCLISTS/conversations/messages)

Is this December? Healthy Ride Report