Monday: It's going to feel warm (18°C) this afternoon. @SthwarkWeather
Scroll to top 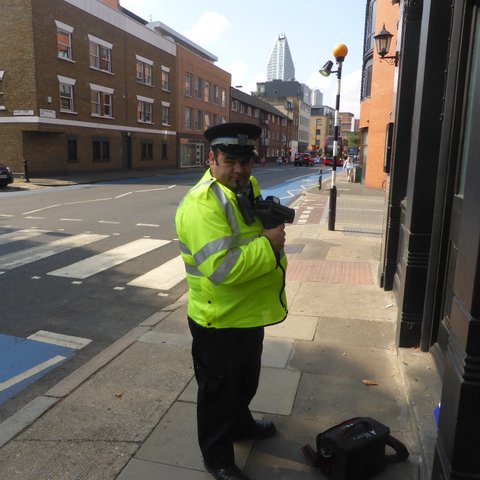 This a first-ever Community Speedwatch on the Heygate in Walworth. Speeds can get very high here, with a nice, straight road ahead. Speedwatch is a collaboration between concerned volunteers, TfL and the Met. A Southwark Cyclists’ volunteer will be holding the speedgun and shouting out the speeds “45” “32” Beside her will be a PCSO noting down the car numbers, makes and colours. Shortly after than deploring letters will be on their way to the drivers from TfL. It’s TfL who fund the PCSO. But it’s the Met who follow up the letters with action, if required.

The PCSO is Kevin Phillips, an affable guy who has been sorting out errant parkers and drivers for more than 20 years. See his pic up above. You can join in by texting him on kevin.j.phillips@met.police.uk. He will be pleased to hear from you and interested in suggestions for places where drivers speed (everywhere, Kevin). Try him and see

The consultation to support a safe, pedestrian and cycle friendly Bermondsey Street closes tonight at midnight!

Today is the last day to respond to the Walworth low traffic neighbourhood consultation.

Tomorrow is the last day to support safe cycling changes in Walworth and on Bermondsey Street! Tell the council you want these schemes to stay