Cycling in Southwark needs a strategy for Burgess Park

Everyone knows we need safe routes for cycling in Southwark, and everyone likes parks. Why not put lots of the cycle routes we need through Burgess Park? This was probably the train of thought Southwark Council had when designing their proposed Southwark Spine route. This (in case you’d missed it somehow) is their flagship North-South cycling proposal, and it’s attracted a lot of attention for a route that mainly runs on backstreets.

We’ll look at the Spine proposals, and some of the politics behind them (and whether they’re a good use of cycling funds), in another post. For now let’s just note that, given the incredible numbers of cycle journeys in Southwark these days:

So how do we reconcile these demands? We’ve thought a lot about these issues with Friends of Burgess Park and Southwark Living Streets. Southwark Cyclists are convinced that a solution that makes everyone happy is possible, but to get there the Council have to consider all the routes together. 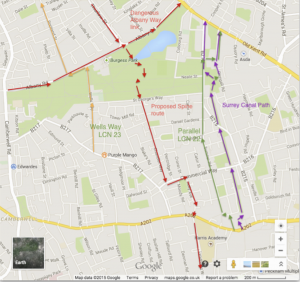 The current routes and proposed Spine

There are three current routes north-south across the park: LCN 22 and 23, and the Surrey Canal Path (which is signed as a shared-space cycle route). Southwark Council’s Spine route also crosses the park, although the exact alignment hasn’t been decided yet. What’s the problem with these routes?

Well, the Wells Way route (LCN23) is really congested at rush hour – and the junctions with Albany Way and with St. George’s Way are terrible, with three lanes of traffic to negotiate, and a very narrow (6.0m) junction, respectively. LCN22 on Sumner Rd is a lot quieter, but again, the junctions with Commercial Road and Old Kent Rd are awful; the OKR one is extremely busy with a massive left-hook risk, while the Commercial Road one has no priority or signalling, so you have to take your chances crossing it – hardly ideal! Then there’s the Surrey Canal Path, and the proposed Spine route. Both of these are contentious because large numbers of people commuting on bikes isn’t really how a lot of people imagine a park should be used – at least, not on paths primarily designed for pedestrians.

Joining the dots – an alternative we can agree on

People commuting by bike choose their route based on a whole set of reasons (convenience, speed, attractiveness, perhaps shops en route) but the biggest influence of all is safety. Lots of studies have shown this, but to be sure we conducted our own survey of people commuting on the Surrey Canal Path. A clear majority chose the park path over the nearby (and completely parallel) Sumner Rd, citing safety concerns (raw data here). 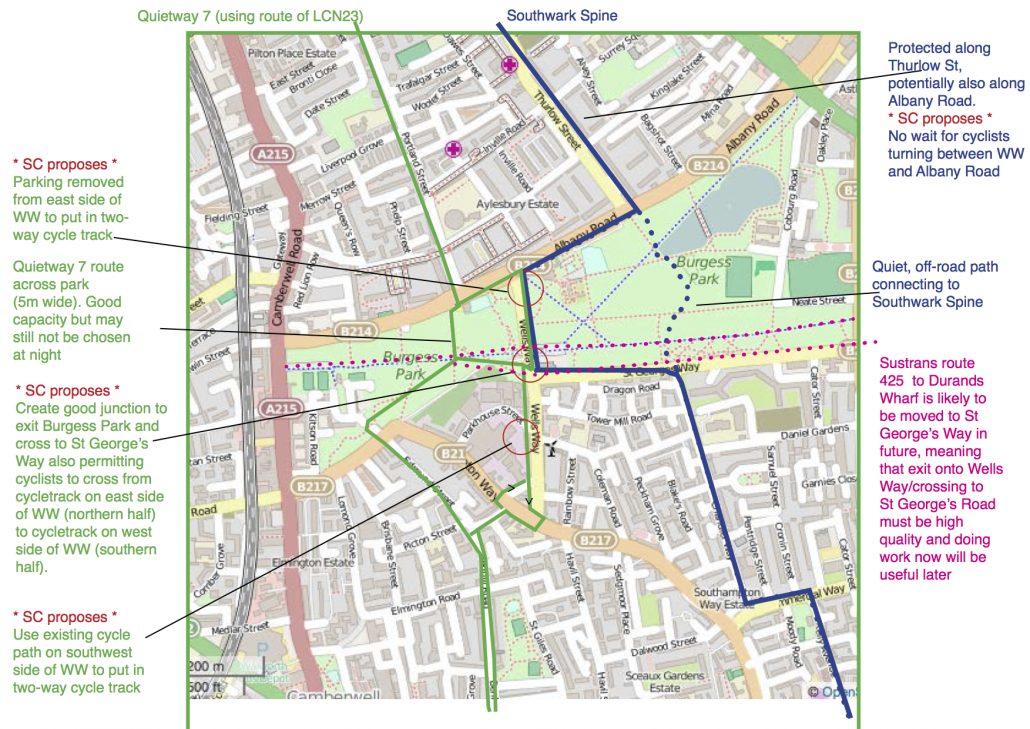 Thinking about routes N and S of Burgess Park as a whole.
NB: ‘off-road’ route through park shown as an indicative suggestion only…

This is why we have to consider these routes together: if the road routes are safe, many more people will use them by choice. If they aren’t, existing cycle journeys will have to go somewhere, and they’ll go through the park as a safe alternative. Here’s an overview we made, tying them all together:

In the east, Sumner Road would be relatively easy to make safe – the southern end (parallel with SCP) is very quiet, so the major hazards are the crossing of Commercial Rd, and junction with Trafalgar Avenue. There is plenty of space to make these safe for cycling without substantial reallocation of motor traffic space, relatively cheaply. The junction at the top of Trafalgar Avenue with the Old Kent Road is harder, but as an alternative bikes could be routed up Coburg Rd. 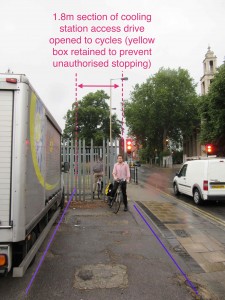 Replacing this fence with lockable bollards would maintain emergency access, but make this junction safe for cycling.

The Wells Way route in the west is much harder – at least as things stand – but we believe it is totally do-able. In fact, the council have already invested in a contraflow cycle lane with protected space for cycling at the southern end of Wells Way, so they clearly see how useful this route could be! A reminder: the main barriers on this route are the tiny, narrow junction with St. George’s Way halfway up, and the big, busy junction with Albany Rd at the top. In fact, there is so much space at the Albany Rd junction (three lanes northbound, two lanes south – a total of five lanes of motor traffic) that it’s actually easy to engineer a solution that includes protected space for cycling with political will. Similarly, the north half of the road has two lanes of unmetered car parking, all of which is non-residential (no houses for hundreds of yards/metres around). One of these rows could easily be replaced by a 2-way cycle track.

So let’s look at that tricky junction with St. George’s Way halfway up the road. This is an incredibly narrow T-junction with three roads, each with two lanes of motor traffic squeezed into barely 6.0m (that’s 3.0m a lane – the bare minimum for DfT rules) and heavily used by cars, vans, double-decker busses – and pedestrians and cyclists. 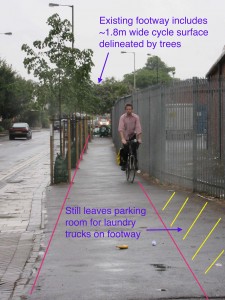 On the face of it this junction is a non-starter. But! There’s a massive 6.0m of width available to double the junction sitting vacant, outside the power company access drive. just take a look at this pic! This access drive is fenced off to prevent parking, so the power substation can be accessed in an emergency… but it could easily double as an extension of the cycle tracks to the north and south, with a row of lockable bollards preventing car parking serving the same job as the fence which is there at the moment. It just needs the council to talk to the power company and sort it out – virtually cost-free – but would add a vitally needed link in the cycle network.
To see how much this would open up, you only have to look a little bit further south on Wells Way, as in this photo. Here there’s a gap between the work the council’s already doing to create safe space for cycling just to the south (you can see it in the background), and the link up past Burgess Park. But there’s loads of space on the pavement already – 4.5m at the narrowest, on a footway hardly used by pedestrians (most on the other side, where the housing is). And even more conveniently, a row of trees already exists, naturally separating the pavement into two. It would just take a bit of paint here to create a cycle track.

So tying all these together it would take minimal interventions to create a very safe route north-south along Wells Way. We’ve shown these below; we think this should be the main commuter link in the Southwark Spine, not the route through the Burgess Park itself. 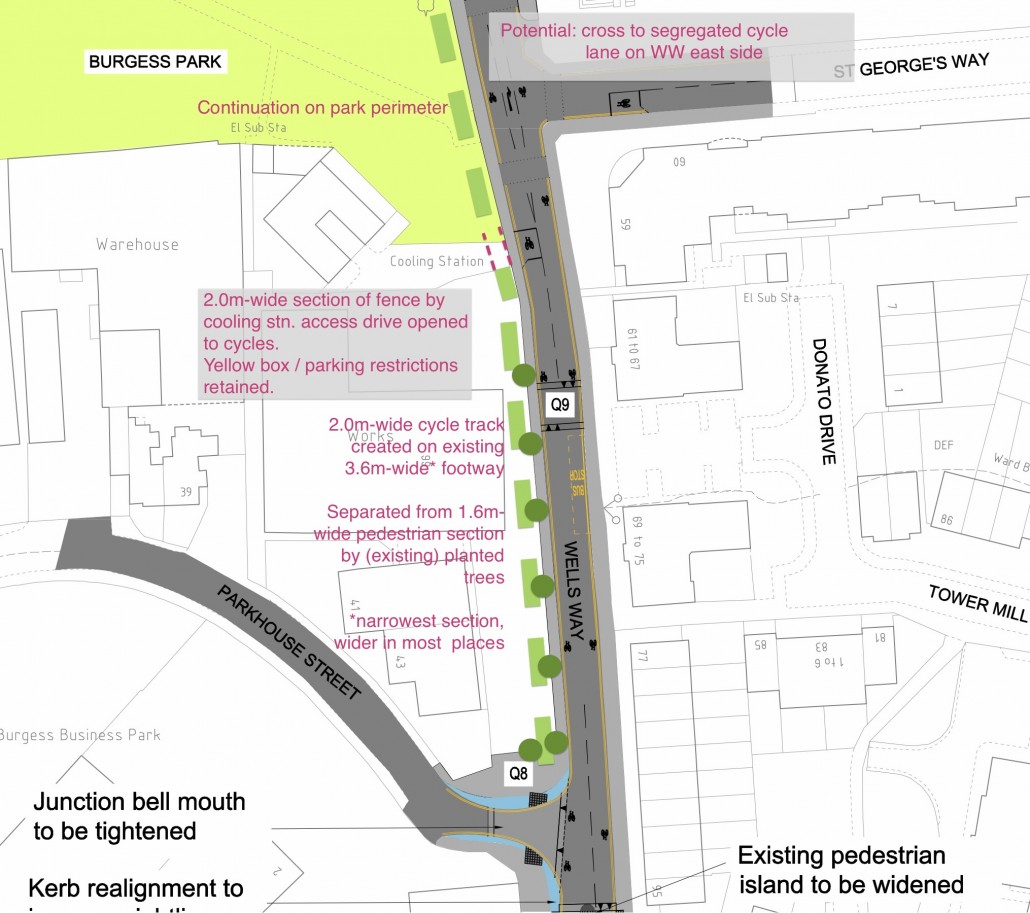 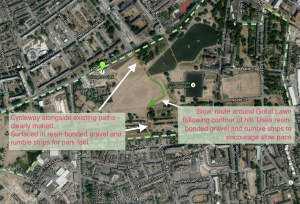 Example of ‘one possible’ quietway route for slow cycling in the Park.

Quietway across the park?

This still leaves the thorny issue of a route across the park itself. To be clear, no-one at Friends of Burgess Park, Southwark Living Streets, or (obviously) Southwark Cyclists want to see considerate cycling banned in the park itself. As we’ve said above, all organisations agree that the best way to enable the thousands of daily commuter journeys already happening, and the thousands more the Council is predicting and hoping for, is to make the direct on-road routes safe with proper space for cycling. But at the same time, some cyclists may want to cross the park even when there are faster, more convenient routes along the road. This might be because of mobility considerations, age, or simply because they’re beginners. And the park is a destination for recreational cycling in of itself, don’t forget! To make sure any new route is in keeping with the style of cycling suitable for the park, Southwark Cyclists propose that as long as safe alternative road routes are physically segregated from motor traffic, cycling routes in the park might include some, or all of:

Southwark Cyclists believe some form of cross-park route could work on this basis but only if the road alternatives are as safe, and more convenient. On the plus side (for other users of the park) such cycle-calming treatment could be retrospectively applied to the Surrey Canal Path too, once Sumner Road/Trafalgar Avenue is upgraded to make it safe, and signed appropriately so people can find it

We are concerned that these plans have not been developed together, and that they don’t plan for a big increase in cycling in Southwark in the next few years. Three of us – Jeremy Leach (also of Southwark Living Streets), Joe Parker and Eleanor Margolies – have worked up a proposal that brings them together.

The central idea is that the council needs to make Wells Way a safe cycling route, as a section of both the QW and the spine, rather than depending on putting both those routes across Burgess Park. This is essential to plan for a substantial increase in cycling.

We propose that the line of the spine should go along Wells Way, with measures taken to make it safe, to Quietway standard. This route along Wells Way is also likely to be used by cyclists travelling along QW7 who choose not to cycle through the park at night.

An additional, low-speed, unobtrusive path through Burgess Park would provide a direct link between Thurlow St and Chandler Way for new cyclists and family use especially in the daytime / school run.

A Google doc summarising these issues is available.

Our demand to the Council

“We want cycling and walking through, around, and to Burgess Park to be safe for all ages and abilities.

“We call on Southwark Council to upgrade the existing cycle routes on Wells Way, Albany Road and Sumner Road/Trafalgar Avenue to Dutch standards. This means safe, fast, direct routes on protected junctions with physical separation of cyclists and motor traffic.

“This will create safe space for cycling on routes around the park and bypassing the Surrey Canal Path, so that considerate leisure cycling can be enjoyed in the park, alongside walking and other park activities.”

Note: this post updated Wed 9 Sept 18:22 in response to suggestions from Friends of Burgess Park.

Proposal for a new route – The Five Parks route

Less traffic on all our roads

(And don’t forget the Oval survey either)

A wonderful celebration today of the life of #AlastairHanton - immensely kind, clear-thinking and effective campaigner for a better world: ethical investment, fairtrade, safe streets... https://hanton.co.uk/campaigning
(Photo by @veripix of Liz Eden and AH on a 2017 @southwarkcycle ride)

Our annual picnic for Healthy Riders with pix https://southwarkcyclists.org.uk/2021-picnic/ includes an exciting video of the slow bicycle race