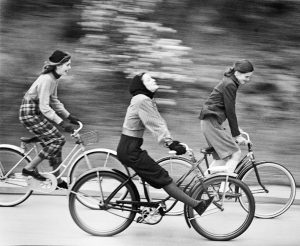 Bicycle Ballet is delighted to announce our new production, Blazing Saddles, an outdoor performance celebrating women & cycling & fashion, commissioned by Southwark Council & funded by Arts Council England. Part choreographed and part improvised, the show will be performed by a core of five professional performers and thirty local people from Southwark.

There’s a general outline of the show & participation at this link: http://www.bicycleballet.com/2015/06/blazing-saddles/

The company creates exhilarating outdoor dance performances on bikes, exploring the joyful highs and gritty lows of cycling. The choreographies fuse dance and physical theatre with visual spectacle, comedy and striking soundtracks. Initially conceived as a mass participatory performance, engaging people and their bikes in new, exciting and unexpected ways is still at the heart of the project. The work is created for outdoors, to cross the boundaries of art, sport, health and environment; to attract the widest range of audiences or passers-by, and to transform familiar environments into places of discovery and magic. But, at its heart, its all about the bike. Expressing the freedom and fun of cycling, and exploring people’s partnerships with their trusty steeds

Volunteers will work with choreographer Janine Fletcher & the creative team to develop choreographic structures and improvisations around the show’s core concept – the issues, ideas and fashions of women cycling through history to the present day.

Bike Ballet are also looking for some experienced lead riders who to lead the community cyclist groups. Blazing Saddles will be created over a series of rehearsals late August/beginning of September, leading to performances around the Dulwich area on 17th September. A detailed schedule is still being worked out.

The plan so far is as follows:

Followed by 3 x 2 hour sessions creating content for the show in the two weeks beginning 5th Sept and 12th Sept.

Show day is 17th Sept – warm up & morning run through, followed by the performance.

Another record – 31 riders on Healthy Ride to Trinity Buoy Wharf

Quietway 1: More than doubling in cycling

END_OF_DOCUMENT_TOKEN_TO_BE_REPLACED

How to learn to ride a bike

Lots of people in the replies asking me to share how I learned as an adult, so they can do it do/teach someone else.

n.b. what worked for me might not work for other people, so definitely don't give up if this advice doesn't suit you!

"Research has consistently shown that safety concerns are the key barrier that stop women from cycling, and the surest way to address that is no mystery."

After lockdown ended in Wuhan, car use doubled versus normal times

If this happens here we’ll see London reduced to a polluted gridlock, with ppl dependent on buses stuck in traffic https://twitter.com/southwarkcycle/status/1264493364684238850

Distancing means buses will be at 20% capacity & 60% of Southwark residents have no access to a car, many are dependent on buses

How will they travel? Tell @peterjohn6 @lb_southwark must provide safe 🚶‍♀️& 🚲 network for those who can active travel and #PutSouthwarkOnTheMap

Distancing means buses will be at 20% capacity & 60% of Southwark residents have no access to a car, many are dependent on buses

How will they travel? Tell @peterjohn6 @lb_southwark must provide safe 🚶‍♀️& 🚲 network for those who can active travel and #PutSouthwarkOnTheMap

The barriers have been removed and crossing made wider between Burgess Park and Surrey Canal.

See the before and after on our blog: https://southwarkcyclists.org.uk/crossing-canal-path-to-burgess-park-major-upgrade/