Construction and road worksCycle and road safetyCycle facilities
No Comments

TfL have finally built a proper hold the left junction and it works well. The left hook risk at this busy junction has been eliminated. All traffic is flowing well.

Junction is between the A3 (Kennington Park Rd, CS7) and Kennington Rd, close to the Oval station. It is a T-junction with a lot of left turning motor traffic and a lot of straight on cyclists. Drawing shows the junction detail. NB North is towards the top right corner. 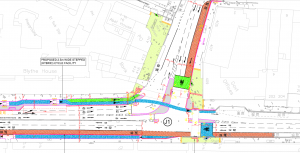 Click on drawing (or images) to see hi res version.

This is a simple junction in that (a) there is no left turn out of Kennington Rd and (b) there is no pedestrian crossing on the west arm of the A3 (there should be, of course…). However, the basic idea of separating left turning and straight on traffic in time can be applied to any signalised junction with room for 2 lanes of motor traffic and a cycle lane (see http://lcc.org.uk/articles/campaign-cycle-segregated-junction-explained). NB What I am calling a “hold the left” design is often designated “cycle segregated”. 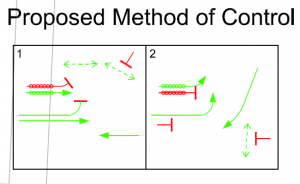 Indication lines with what look like beads along them are the cycle movements. Pedestrian movements are dashed green.

Header photo is from the south west on the A3. This is phase 1, straight on only. Note the white van in the turn lane is held on red, so any straight on cyclist can proceed safely with no risk of left hook. Note cyclist also held on red signal. This is to avoid conflict with pedestrians crossing Kennington Rd.

Below is a view from slightly further back.

This is phase 2, the turn phase. The 3 cyclists have separated into the appropriate lanes. All straight on traffic is held so right turn out of Kennington Rd is safe and pedestrians can cross the far (north east) arm of Kennington Park Rd.

Photos are 12.30 on Thursday 24 Sept, 2015. No queuing on any arms. Note the 2 lane segregated cycle track, stepped down from pavement and up from carriageway.

Spoke to a couple of cyclists, one of whom used the junction regularly. He liked it. When I told him a similar arrangement was planned for the Kennington Park Rd/Brixton Rd junction he was pleased as he goes straight on there, through the left turning traffic at present.

Spoke to 2 blokes in hi-viz supervising the work on the south side of the junction. Asked about peak morning period. They said it could be pretty iffy as cyclists (a) ignored the left turn red and conflicted with the pedestrians on the crossing and (b) some of the Lycra brigade preferred to stay on the straight on carriageway and this was narrow next to the central island, causing near misses. Checked this out on Friday 25 Sept, 8.30 am. 5 minute counts showed 79 cyclists going straight at this junction. 9 (11%) used the carriageway rather than the cycle lane. Those on the carriageway appeared to have enough room. Watched 2 phases of turning cyclists. 44 cyclists turned left. Only 5 (11%) turned on red. There were a lot of children crossing on the way to school. The cyclists jumping red all appeared to ride carefully, avoiding close encounters with pedestrians. Nevertheless would be good to see these numbers fall. When the cycle route is complete through the upstream junction it is likely fewer cyclists will use the main carriageway. Respecting the left turn red may need some cyclist education.

@Chris_Boardman will be leading the new body as the first interim national Active Travel Commissioner.

Find out more about our plans here 👉 https://www.gov.uk/government/news/olympic-gold-medallist-and-cyclist-chris-boardman-to-lead-governments-new-active-travel-body

Wouldn’t it be great to have a cycle hire scheme across the whole of @lb_southwark?

🚲🅿️Got a new bike for Christmas? Don't know where to park it? Check out our guide on how to request a cycle hangar https://southwarkcyclists.org.uk/resources/get-secure-cycle-parking/

@barbyonabike @MPSPeckham @southwarkcycle Could you @MerrillDarren inform this is unacceptable. Course all aware of heightened state of tension re- knife violence now. But blocking lanes like this esp for long periods could lead to v serious for cyclists. Not give the impression they too think they are above the law!

New briefing paper from consultancy Transport for Quality of Life collates the evidence on the need for absolute traffic reduction to meet climate targets. At *minimum* a 20% in car mileage must be achieved by 2030, requiring transformational policy change http://www.transportforqualityoflife.com/u/files/211214%20The%20last%20chance%20saloon%20to%20cut%20car%20mileage.pdf