Tuesday: It's going to feel warm (20°C) today. High UV (6) this lunchtime - cover up 🕶️. Nice day to be outside! @SthwarkWeather
Scroll to top 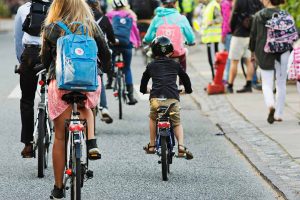 Sad to say, this isn’t a picture of Bellenden Village. It could be but it won’t be. Everyone says they want children to get outdoors, take exercise and have fun. Cycling ticks all those boxes. Southwark is committed to 8-80 cycling — they talk the talk but somehow walking the walk is too much for them.

Ok, lament over. The council’s plans for the Spine cycle route through Bellenden are pretty poor. Unbelievably they make a dangerous situation more dangerous. There’s some attempt at protecting cyclists from traffic but it’s not enough and fizzles out where it’s most needed. Paint on the road won’t protect children from traffic. It’s confusing, inadequate and insufficient.

That’s a big shame because it would be possible to put a really good 8-80 route through Bellenden Village with big wins for the shops, shoppers, pedestrians and cyclists. Money can’t be spent twice and this scheme would be a waste of it. Save it for something worthwhile, Southwark.

New dates for August... We'll be leading the #BanksideBikeTrain every Friday this month to help build your confidence coming back to #Bankside by bike. First guided ride this Friday is Tulse Hill- Herne Hill - Loughborough Junction onwards to Bankside! http://ow.ly/c4TG50APcMt

We're starting to see the benefits of low traffic neighbourhoods in Southwark as well.

Great thread of photos of how much nicer it is to cycle when you're not intimidated by motor traffic.

#RailtonLTN has been in place for just over a month now. We thought we'd share some of the pictures we've snapped in the area showing the wide variety of people who now feel enabled to cycle (and walk - check the pavements!) and as enforcement ramps up this will keep improving 4

Check out our programme 👇 a fab line-up of socially distanced community events for August.

Loving the new signs at #DulwichSquare. The planters are there to stop vehicles but the streets are very much OPEN to people, and so much safer now 💚

August is #NationalRoadVictimMonth. Next Saturday (8th), @RoadPeace will be holding their annual Ceremony of Remembrance online. Glad to see they're still able to hold this important event, to honour all those killed in crashes. #RoadDanger #VisionZero
https://www.roadpeace.org/2020/07/29/roadpeace-wood-ceremony-of-remembrance-moves-online/