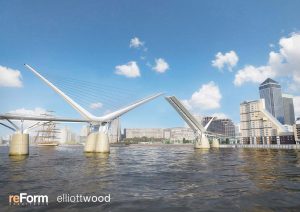 This is the open version of London’s first proposed pedestrian and cycle bridge. Most of the time we hope it will be close to allow thousands of cyclists and walkers to flow between Canary Wharf and Rotherhithe.

Mayor Sadiq Khan is a fan and wants the bridge built by 2020. Enthusiastic support comes from across the political spectrum including Labour MP Neil Coyle, Lib Dem Caroline Pigeon, chair of the London Assembly Transport Committee and Labour-led Southwark Council.

Sustrans commissioned a Yougov poll which showed that over a third (35%) of Londoners backed a new walking and cycling bridge, even if it meant less money would be spent on other projects affecting London’s road and rail network. The polling also found less than a quarter (24%) of Londoners opposed the traffic-free bridge. This is a bridge Londoners want.

Unlike the Garden Bridge, the Rotherhithe or Brunel Bridge would enable around 13,000 clean commutes by pedestrians and cyclists every day and will be built where it is needed most, in a bridge free part of our city.

This will be a state of the art bridge – car free, pollution free, and free for all to use. Sustrans want the design will be decided after a truly transparent and fair design competition to get the stunning design our stunning city deserves. More pictures here: http://www.rotherhithebridge.london

so now, I’ll stop waxing lyrical and get down to the nitty-gritty. TfL are organising community workshops about all this. They will be held at the Dockland Settlements Communities Centre at 200 Salter Road, SE16 5LJ.

There will be limited space. To register send an email to rivercrossings@tfl.gov.uk with your name and postcode. Let us know how you get on

It was great to see so many kids out on their bikes at #KidicalMass. Which is possible thanks to safe and protected provisions appearing all over our borough. We're pleased that our current leader @kieronjwilliams has pledged to our #ClimateSafeStreets asks to do more in next 4y

Kidical Mass Weekend saw thousands of children take over the streets all over the world. In London they rode from Monument to Southwark Park celebrating good infrastructure and highlighting the need for more.
#KidicalMass #KidicalMASSive #KidicalMassLDN https://twitter.com/netwench/status/1525867380009840640

Every two minutes in the U.K. a baby is born in an area with dangerously polluted air. Why isn't Government committing to stronger targets in the #EnvironmentAct? We need #CleanAirNow. We can't wait another 18 years for outdated @WHO targets.
https://www.independent.co.uk/news/health/uk-babies-born-toxic-air-b1945726.html

We’re pleased to announce that today we’ve received pledges to our #ClimateSafeStreets asks from both @SouthwarkGP and @SouthwarkLabour!
You can see more information on the asks at http://lcc.org.uk/southwark

Today is your last chance to ask your next council leader to commit to deliver #ClimateSafeStreets
Click http://lcc.org.uk/climate now, please
When we deliver streets safer for walking & cycling, more people do so, and we cut emissions.
Action on cycling = action on climate