Friday: It's going to feel hot (24°C) today 🌡️. It's going to be quite humid today (dew point 18°C). Moderate UV (4) this lunchtime - take care if you're fair. @SthwarkWeather
Scroll to top

We were shown round by Paul Gasson, of Waltham Forest Cycling. We first cycled around some of the outlying bits, then locked up our bikes next to Walthamstow Station and walked around there.

The original council bid was fairly unambitious (like the current Kingston plans, perhaps), but WF Cycling convinced them to go big or go home. And with some determined political support, they went big. They received £33 million in Mini Holland Funding, and a further £20 million in developer money (S106) and similar.

The “villagisation” consists of turning an area into a ‘village’ by removing any through traffic. Roads are “filtered” with bollards, trees and planters, allowing walking and cycling along their whole length, but making the road access-only for motor vehicles.

On through roads, cycling has been segregated from motor traffic in space or time. Wider roads have segregated tracks; there are parallel pedestrian and cycle zebras (“tiger crossings”); there are separate cycle phases at lights; on a narrow road, cycles get a 20s headstart, enough to clear the road before motor traffic arrives.

“Greening” has been a large part, improving the public realm for everyone. The council is obviously concerned about ongoing maintenance costs, but each road has local residents willing to “adopt” their new patch of plants, and do the gardening themselves.

A high street has had motor vehicles banned during the daytime, with only the local bus coming through. Now a very nice place to sit and have a drink, as we did! 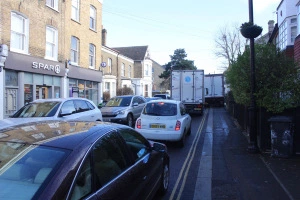 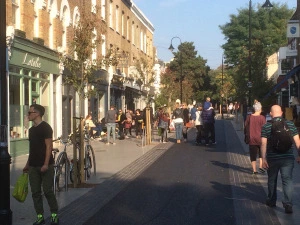 Before and after ‘villagisation’ on Orford Road

Side roads have been given “Copenhagen Crossings”, where the footpath stays level across the mouth of the junction, and has visual and legal priority, making it easier for pedestrians.

The cost of closing some of the railway bridges has been paid for by Network Rail, who now do not have to spend money strengthening bridges to cope with continued motor traffic use.

The difference in atmosphere is noticeable: bird song instead of engines, people confidently wandering down the middle of their road with a pushchair. A new stand of trees outside the Registry Office is now a favoured place for photos! They’ve seen a massive uptake in “non-traditional” cyclists – older people, children, parents, on more upright “Dutch” bikes, and it’s not even 20% finished yet.

You don’t realise how hemmed in you are by motor traffic normally until you stand chatting with a large group in the middle of a crossroads for five minutes without seeing a single car. It reminded me of my childhood, where we’d fly kites down the middle of the road because there weren’t any trees there! Not something I’d try today on most Southwark roads.

The ‘secondary town centres’ consists of villagisation at 3 other locations in the borough, which are then linked to Walthamstow with safe and direct cycle routes.

The Lea Bridge Road runs from Hackney to Epping Forest, about 5km (3 miles). They are adding a segregated cycle track on each side of the road (which includes widening some bridges and moving the carriageway, which is a large part of the expense). This will open up a bunch of new routes for cycle, by turning a barrier into a safe route. It should also improve things for pedestrians, and hopefully allow business to develop along the road which rely on passing foot/pedal traffic.

Regarding peripheral measures, there is secure cycle parking at each station. This costs £10/year, which is intended to be affordable for all. There is also a long waiting list for the Lambeth hangers on residential streets! Hiring a place in these is much cheaper than in Southwark. There is also free cycle training for anyone who wants it.

If Sadiq Khan upholds his election pledge to provide £10 million of Mini Holland to suitably ambitious boroughs, and Southwark bids sufficiently ambitiously, what could we achieve?

The most expensive part of WF was the superhighway. Southwark could set aside that strand – there are other approaches to getting segregated cycle tracks on main roads in our more central part of London. With £10 million, we could likely implement 2 villagisation schemes in the borough, with a linking route. Such projects are most likely to be welcomed in areas with low car ownership, and young families (since they allow kids to play out, and travel independently and safely). They are also important in promoting local employment that can be reached on foot or by cycle.

Lycra for people who don’t usually fit into lycra

Thread: Anyone listening to One Dulwich’s outrage at roads being closed to through-traffic might be mistaken for thinking it’s a brand new idea, never tried before.

About 10 years ago, TfL’s strategy was explicitly to route motor traffic down residential roads to ‘smooth traffic flow’. This just happened to people on those roads. No consultation. Now we are only just beginning to undo that policy. https://twitter.com/cllranderson/status/1293608717947109382

If you have a mo, do please sign our petition, about phasing out petrol and diesel engines by 2030.
https://actionnetwork.org/petitions/phase-out-diesel-and-petrol-engines-by-2030
#DitchPollution #CleanAir

Compare & contrast the pic below to this one from Horniman Park during lockdown: https://twitter.com/southwarkcycle/status/1293503296427220992

Look closely. Can you see the Shard and the City? Do you remember the skyline photos from lockdown?

This was take from the Horniman Museum yesterday. Car use in the UK is at pre-lockdown levels yet public transport use is still severely down.

@lb_southwark what is going on with fly tipping along Senegal Way? It's gone from being 'a bit scruffy' to having several tonnes of industrial fly tips and at least two burnt-out cars on it! Makes the adjactent Q1 / NCN425 cycle route horrible @southwarkcycle @SustransLondon