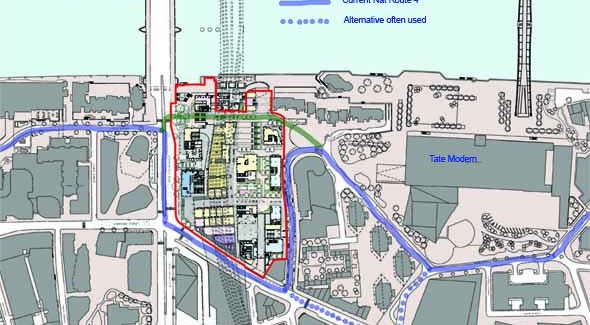 Many of you will have cycled National Route 4 parallel to the river.  The section from Tate Modern to Upper Ground has always been a problem as it involves a large detour on to busy Southwark St.  Made worse recently by the closure of Upper Ground, although this is re-opening in March 2014 (see post Nov 12: Not opening soon – Upper Ground). 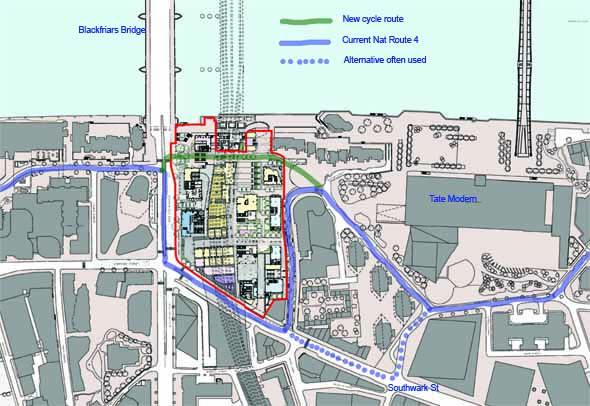 Now some good news. Sampson House/Ludgate House (Daily Express building), the 60/70s blocks on the east side of Blackfriars Bridge approach, are to be replaced with 9 new blocks including a couple of really tall ones (Southwark Planning Application 12-AP-3940).  This provides the opportunity to take NR4 from Hopton St to Upper Ground without diverting to Southwark St as at present.  Southwark Council approved the plan without a cycle path (see Post Oct 8, Planners ignore cyclists etc

). Fortunately someone at the GLA spotted this and called the plan in.  We have been told by Yvonne Lewis (Strategic Planning, Southwark) that a route has now been agreed with the developers.  Sustrans has been involved in designing this and an announcement is likely as soon as Southwark have formally agreed the plan.  However, it is apparently a done deal and NR4 will be much improved when the new development is complete – whenever that will be!