Cynthia Barlow’s speech at the vigil, May 17th, Elephant & Castle 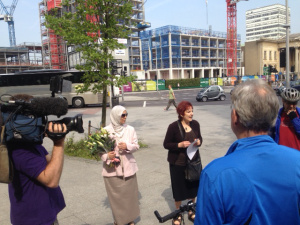 On Saturday May 17th, on the way to the Big Ride, we held a short vigil at the southern junction at the Elephant and Castle.  This was to mark the fatal collision on Tuesday 13th May.  The vigil was attended by family members of the cyclist who died and also by Cynthia Barlow of Road Peace.  Here is what Cynthia said:

I have been involved in the issue of cyclists’ deaths since my daughter was killed by a concrete mixer lorry while she was cycling to work in 2000. The complacency I had to deal with, the attitude of “accident, nothing you can do, shrug your shoulders and walk away” was absolutely unacceptable.

Since then I have worked continuously in trying to stop these horrific deaths. I have concentrated mostly on the lorry itself; of course every aspect of these collisions has to be carefully examined – the operator, the driver, the vehicle, the road design, all of these have to be carefully considered. And I am fully aware that there are road design issues here. But to quote some figures : between 2002 and 2009 in London there were 189 fatalities involving HGVs, and only 9 of these involved the person in the cab, and of course that’s a tragedy, but the remaining 180 deaths all involved other road users, mostly pedestrians and cyclists.  Year after year, a significant proportion of the deaths of cyclists on our roads involve HGVs.  I’m not looking for someone to blame, what I am saying is that the vehicle which poses the most risk is the one best placed to manage that risk. We now have, through TfL’s work on Construction Vehicles, a standard for the management of work-related road risk. We need to ensure that companies abide by that standard.   We need to insist that all the lorries which want to use our roads are in fact roadworthy, currently many are not. Surely that can’t be too much to ask? Why on earth do we tolerate on our roads enormous heavy vehicles which can’t see what’s in front of, or around, them?  I have worked a lot with TfL and with several of the big companies and contractors, and we know what needs to be done.  We need to redesign the cab, and until that is done, we need to make sure that every vehicle is fitted with appropriate safety technology – mirrors, cameras, sensors, sideguards, whatever, to ensure that they are fully aware of all the other road users around them, and are able to protect them from harm.

Why do we still tolerate the presence of vehicles in which the driver can’t see other road users, when we know what can and should be done to change this? And London is not a random exception. I attended a meeting of the European Parliament in Brussels recently, and learned that, across Europe, 4,250 people are killed in incidents involving HGVs every year. We can stop these preventable and avoidable deaths, and we should, now. What are we waiting for?

Thank you for showing your support by being here today.

Southwark needs to do more to make our streets safer.

Today is the last day to respond to Southwark Council's Climate Strategy consultation.

See what needs to be added to the transport section: https://southwarkcyclists.org.uk/southwark-councils-climate-strategy/