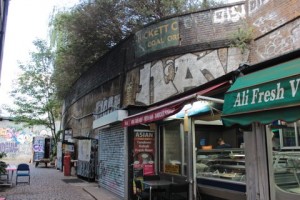 Great idea but short on nitty gritty. To come to pass it needs two new bridges across roads, two built-out platforms slung beside the railway tracks and (the easy bit) a big hole in a concrete wall, plus ramps up and down for bikes.

The project is named after the eponymous coal line which ran into coal merchants’ sidings opposite Peckham Rye Station. This was the coal distribution centre for south east London in the days before the Clean Air Acts. The coal yards closed in 1954 and are now a scaffolding yard.

The picture above shows where the coal merchants used to get their coal. They had hoists to get the coal down from the sidings. The visualisation shows steps to get up and down here and it’s hard to see how the sort of ramp which would attract cyclists could be fitted in. 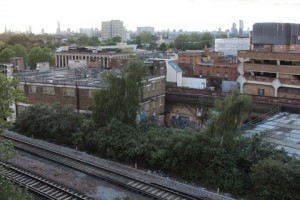 Once up there, there would be 21′ of space to share between cyclists, pedestrians, wildlife and a wall stopping everyone who makes it up there from straying onto the railway tracks. The picture taken from the top of the Bussey shows what’s there now.

There’s a feasibility study underway which is due to report late this year. The bridges, built-out platforms and ramps are going to make it pretty pricey. There are a lot of cheaper ways to get cyclists from Peckham Rye Station to Queens Road.

Another record turn out for our Healthy Ride

Healthy Ride Report – Rotherhithe to Dulwich and back

There are no upcoming events at this time.

Thanks to @lb_southwark for the traffic calming measures on Melbourne Grove. The journey to The Charter School East Dulwich is already much safer for our young people. #saferstreets

Great to see evidence of support for #LowTrafficNeighbourhoods. 51% of Londoners surveyed by @TfL agree with the implementation of LTNs in their local areas during the Covid-19 crisis whilst social distancing is required, with 51% agreeing with them longer term...#Streetspace https://twitter.com/BBCTomEdwards/status/1306643636583624705

Like many places across London, Kennington Park Road's bus lane signs have just been changed and they are now operating 24/7. In the evening rush hour they appeared to be supporting swift movements for buses and safe space for people cycling

Yes - road safety is (or should be) a crucial part of these schemes. Any reduction in traffic will reduce risk to vulnerable road users. #RoadSafety #VisionZero #TrafficReduction https://twitter.com/quickerbybike/status/1306510559328821250

A child is killed by a driver every week in the uk.
It's usually when they are walking to school.
This is the context for debates about #LowTrafficNeighbourhood
and #schoolstreets schemes.

If I had been alone I would’ve walked across the road & not known that I was in danger as I can’t see the missing bollard.

These actions of vandalism put pedestrians like me at risk.