Abandoned bikes: help get rid of them 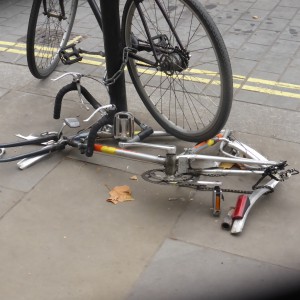 Abandoned bikes; thieves have stolen most of the bike and now the remainder is hanging around, blocking the bike stand, endangering pedestrians and sending out all the wrong messages about the joys of life with a bike.

You can now report all abandoned bicycles to Southwark Council via www.southwark.gov.uk/street-care

Once reported, a notice is put on the cycle to say it will be removed in four weeks. In a majority of cases, the cycle is claimed by the owner and removed. If it is not moved, council officers will take the cycle to the council’s depot where there are kept for approximately one month to provide an opportunity for them to be claimed. Once the month has lapsed and no one has claimed them, the cycle is passed on to a company called Nip Nip who run a programme with St. Mungos Skills and Employment Centre whereby homeless people are trained to repair the cycles. They are then sold which provides funding for the programme.

If you make a note of the date you reported the bike and there isn’t a notice, you can contact the Street Cleaning teams on EnvironmentalCustom@southwark.gov.uk.

We have a friendly councillor and if we can show her that, though the policy is beautiful, it is not being put into practice we could well make progress. If anyone feels able to do their bit, gratitude will be theirs as well as, more tangibly, somewhere to park their bike.

The light says green but cyclists (and pedestrians) can’t go