Cycle and road safety
No Comments 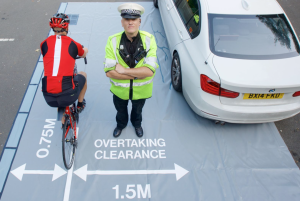 Southwark Cyclists gave the Met a list of roads where close passing was predictable and repeated: Nunhead Lane, East Dulwich Grove, Peckham Hill Street — I could go on as no doubt could you.

A Met cycle cop cycled them all to see for himself and they settled on Peckham Rye West (another of our suggestions) because there were places for police motorbikes to hide up side streets and access to the park where they could pull off offenders for a good going-over and ten minutes of re-education. 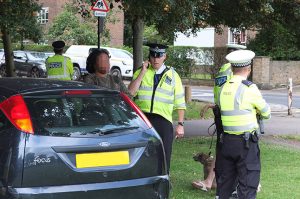 You will recognise the west side of the park with added police.

The cyclist was in civvies, though still in cycling gear (maybe that’s an inducement for bike-hating drivers) but a line of police vans was parked in full sight under the trees in the park. Anyone even remotely attentive or aware of safe driving should have noticed that something was going on. The idea, apparently, was to alert those bright enough or well-informed enough or paying attention so that they could briefly up their driving and avoid the long arm of the law.

In 60 minutes, six drivers either were too blind (they were given eyesight tests) or too dozy to heed the warning. The first was taken off the road altogether for having no insurance, road tax or MOT — or giving the cyclist enough room. Two were mini-cab drivers (didn’t you just know already how awful they are) so they get proper punishment.

The other three were private cars whose drivers were delayed for re-education. Not decapitated on the spot as one might wish.

Oh and a bus (those other serial offenders) tailgated the Met cyclist and then overtook him with centimetres to spare. They weren’t stopping buses, out of compassion for all those passengers, but the driver will be hearing from the Met Cycle Cops team.

The cops wouldn’t say what number the bus was but the quick-witted who can read will find the answer here: https://lcc.org.uk/articles/operation-close-pass-starts-in-london

Close Pass – and why do buses not keep to the speed limit?