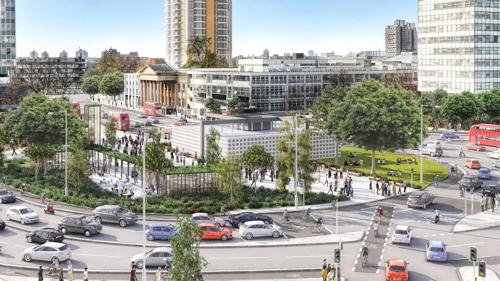 Further to the announcement on improving 33 road junctions in London, four in Southwark, made last week as part of the Mayor’s cycling programme, images have been released of the proposal for the redevelopment of the northern roundabout at Elephant and Castle.

According to TfL, the plans, which will create 5,000 new homes and 4,000 jobs, will vastly improve the facilities for road users and local residents.  Dedicated cycling facilities will be created, with public consultation starting later this month and work beginning early next year. 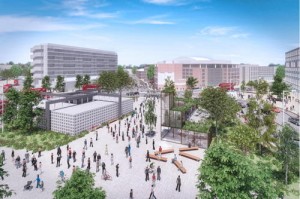 As well as Elephant & Castle, planned improvements were announced for the Tooley Street / Borough High Street junction, the Rotherhithe Tunnel roundabout and the Surrey Quays gyratory. Detailed designs for the first schemes will be published next month and work will begin in the second half of this year.

It was great to see so many kids out on their bikes at #KidicalMass. Which is possible thanks to safe and protected provisions appearing all over our borough. We're pleased that our current leader @kieronjwilliams has pledged to our #ClimateSafeStreets asks to do more in next 4y

Kidical Mass Weekend saw thousands of children take over the streets all over the world. In London they rode from Monument to Southwark Park celebrating good infrastructure and highlighting the need for more.
#KidicalMass #KidicalMASSive #KidicalMassLDN https://twitter.com/netwench/status/1525867380009840640

Every two minutes in the U.K. a baby is born in an area with dangerously polluted air. Why isn't Government committing to stronger targets in the #EnvironmentAct? We need #CleanAirNow. We can't wait another 18 years for outdated @WHO targets.
https://www.independent.co.uk/news/health/uk-babies-born-toxic-air-b1945726.html

We’re pleased to announce that today we’ve received pledges to our #ClimateSafeStreets asks from both @SouthwarkGP and @SouthwarkLabour!
You can see more information on the asks at http://lcc.org.uk/southwark

Today is your last chance to ask your next council leader to commit to deliver #ClimateSafeStreets
Click http://lcc.org.uk/climate now, please
When we deliver streets safer for walking & cycling, more people do so, and we cut emissions.
Action on cycling = action on climate