Camberwell Green plans – nothing for cyclists – and worse!!!

Following on from the Camberwell community council meeting the proposals for Camberwell Town Centre public realm and pocket places programme can be seen at
> https://consultations.southwark.gov.uk/environment-leisure/camberwell-town-centre-public-realm-improvements

We had a site meeting on Monday 3/8/2015 and overall took the view that the design made is very old fashioned  and overall makes it more dangerous for cyclists – especially taking out the bus lanes southbound – but not only that.  A real opportunity is being missed to update this junction to modern standards as at Oval and Vauxhall.

The designers appear not to have read the new Southwark Cycling Strategy  – we know it has only just been agreed but how long before there is another opportunity like this – this plan has been cooking for what – five years?  In the next five years you strategy has cycling increasing markedly – at least in theory  – this design will help Southwark to miss its target by a country mile.

Southwark Council and TFL really need to decide who this junction is for ( in its various sections) and  design to that – and if it is not for cyclists  who go through there in large number at tidal flow times at least, then other provision needs to be made to allow cyclists to avoid the junction in a green wave fashion.

We have some suggestions as to improve matters including moving the traffic light on the east bound side to make a cycle by pass  and better use of Orpheus Street  for bus stops.

More will come when we finalise  our comments but by and large there is nothing in these plans for cyclists  – and indeed as at the Elephant and Castle North Roundabout  – this will be worse for cyclists when it is done with at least six YES SIX  left hooks and LESS protected space.

We shall be furious if this goes through on a local residents consultation on the basis of the alleged improvements for pedestrians (e.g. pedestrian widening at wrong place causes pinch point for cyclists) when this junction is vital in a much wider area.  And crucial for cyclists. 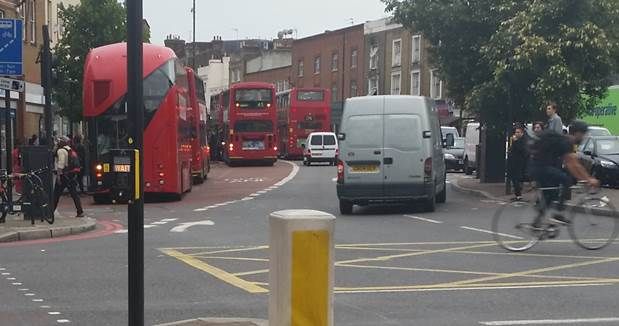