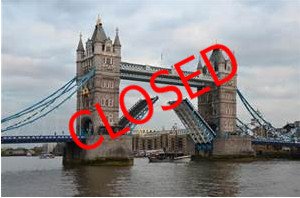 Update. Counts on Tuesday 4th Oct indicate some extra cyclists along Tooley St heading for London Bridge. But around 250 choosing to walk with bikes across the bridge. Just enough room even at am peak to do this in 6-7 minutes. Anyone interested in the numbers, check this document: towerbridgeclosure

Cycling routes with Tower Bridge Closed (Oct-Dec 2016)
See https://goo.gl/ZZ9STQ for map of cycling options. The TfL motor diversion map is here, and the cycle map here.
Northbound cyclists
There official TfL cyclist northbound diversion route goes over Southwark Bridge. If coming from the south (e.g. Elephant and Castle) this is fine. But their marked route from the east involves an additional 1.2km compared with Tooley St and London Bridge.
For the many cyclists approaching via Jamaica Rd and the east part of Tooley St there are no signs at all. It is possible to simply continue along Tooley St and turn right on to London Bridge, joining the TfL motor diversion route. Take care on the narrow stretch of Tooley St as you approach the station. On the north side of London Bridge the motor diversion involves difficult right turns. An alternative is shown on the map. This involves going left on to Cannon St, then first left down a narrow paved, filtered, road (Laurence Pountney Lane) and on to the EW superhighway. This is a 300 m detour, but is safe.
If coming from the Old Kent Road direction, head for London Bridge or Southwark Bridge by any appropriate route, including the TfL motor diversion route. However the junction at Borough is not nice. Alternatives are to go down Tower Bridge Rd and use Tooley St. Or there are several possible routes on minor roads, one of which is shown on the map. However, there may be a lot of motor vehicles using these back streets, so they could become quite congested.
Additional note on first morning (Oct 3rd): You can also push your bike over Tower Bridge with the pedestrians (takes 6-7 minutes). The path is narrow in places, but because the flow is quite tidal and most pedestrians are going the same direction as the cyclists, this was working OK this morning. However, if you do this, be VERY CAREFUL when continuing through the junction at Tower Hill. Because the bridge is closed, TfL is allowing motors to right turn out of the road opposite the bridge (Mansell St). These drivers are NOT EXPECTING traffic to appear from ahead. There were some near misses this morning.
Southbound cyclists
At Monument TfL have signed in yellow the dogleg on to London Bridge. The left turn off London Bridge (south side) is not signed as a diversion route even though many cyclists who use Tower Bridge turn east along Jamaica Rd. Please go carefully through the contraflow at London Bridge station where there are thousands of pedestrians using the very inadequate crossings (and the road in between them!). Note although not “official”, St Thomas St is open and only taped off, so it is a very quiet alternative from Borough High St to Bermondsey St. An option for Deptford or New Cross is to use Quietway 1. Can join this at Pilgrimage St, off Gt Dover St. From the bridge head for the Borough and turn into Gt Dover St. This route is not so easy at the Borough going into town, but it is an option.

Bike Train
Have also included the way to get from the Southwark Cyclists Bike Train route to Southwark Bridge. Simply join Cycle Superhighway 7 at the Elephant bypass.

Less traffic on all our roads

(And don’t forget the Oval survey either)

A wonderful celebration today of the life of #AlastairHanton - immensely kind, clear-thinking and effective campaigner for a better world: ethical investment, fairtrade, safe streets... https://hanton.co.uk/campaigning
(Photo by @veripix of Liz Eden and AH on a 2017 @southwarkcycle ride)

Our annual picnic for Healthy Riders with pix https://southwarkcyclists.org.uk/2021-picnic/ includes an exciting video of the slow bicycle race